Helping Out When Someone is in Need...

Here is a short (ahem...long) story of a friend of mine who is in need and literally hers and her family's life changed in less than four-five months months.
{if you just want to donate and not read it all...the template pictures are at the bottom. just pay pal jeanniewoodruff@yahoo.com. Thank you!}

I received a phone call from a friend that I hadn't talked to much this last year unfortunately. Just remembering this phone call makes me want to cry {that ugly cry} all over again. She had called to ask my about my surgery that I had just had...she is a nurse so she loves the details. Anyway long story short...she was having some medical issues starting in March and a little earlier. She was seeing doctors for things like falling for no apparent reason. She fell out of her car and doesn't know why. The doctors would tell her, you are klutzy, you have a pinched nerve, you have this and that, etc. Nothing was obviously the right diagnosis. All they diagnosed her with was completely WRONG! She has now found out she has some sort of mass or several masses {they have no idea what kind yet} and that it will continue to attack her brain. She did tell me it was not curable. They thought several things but the latest was MS...she has found out it isn't MS. Without asking her, hey Anna how long do you have to live...I have no idea what the outcome is for her. But something attacking your brain and making it deteriorate quicker can't be a good thing. They do know this mass and her fate will depend on how aggressive it is. She has also started having seizures in which the oldest boy has witnessed and had to call 911 to get her help. She can't shower on her own, she has to wait until her husband can get home from work. She can't be left alone, the boys and other family members check on her regularly. Here is a woman that was used to helping others {she was s nurse} and now she needs all the help. They are now on the waiting list to go to Mayo and when Mayo calls they have to drop everything and go. I wondered how will bills be paid, she isn't working, her husband would have to go with her. {I did ask her if she will go back to work...she says kind of jokingly, "in my mind yes, in reality no..hahaha} Who takes care of her children...I just recently spoke with her husband and now her mom is in the hospital...doesn't look good and has pulmonary fibrosis and they don't know how long she will live. I mean really? Haven't they gone through enough already?


At the time that I had spoken with Anna she was still pretty upbeat. She has three wonderfully active boys and a great husband. They have had to get rid of two of their cars...one because she can't drive and two because one went back to the bank. This family LOVES football and it is their life. We as photographers LOVE a great family session...this family loves their football shots. When I did the local JFL pictures here they spent quite a bit on sports photos which most people do not. They did this because this is THEIR passion. Had I had this exact conversation with Anna before I went into surgery I would have taken them out IMMEDIATELY and done a family session. When I told this to Anna I said that I would have done this...her first response was oh Jeannie I couldn't afford you (that broke my heart. the thought of someone NOT getting family photos in a situation like this because of money, shoot I will do them for free). I said Anna, don't worry about it. Let me take you out and get you some fun family shots. Well then she tells me she looks like Bubba Gump. I am still waiting for her to give me the ok, then I will go out with them and do a family session!


So here is the thought. I have created some templates for this. Paypal jeanniewoodruff@yahoo.com and I will sell 5 templates for $10 and then my goal is to raise enough money for this family to afford football and the expenses that go along with it. There are all kinds of fees, traveling, shoes, pictures, equipment rental, etc. Would you all kindly help me make this a reality for this family? This family has NO idea I am doing this for them. To be honest I would do something here locally, but their story isn't out in its entirety yet I don't think. So if I can just make them dinner one night and have a card tucked in their with this...I just think this would help them out and maybe take away a bit of stress for a while. This story seriously ROCKED me to my core. I just was devastated to hear it and think about what if it was me in this situation. Not knowing what the future holds for her let alone her three boys, and husband...and now her poor mom. I just feel the overwhelming need to do something. So I am asking the photography community to help me out a bit. So, what do you say? Can we help them out? If you paypal me with the reason being templates so I can keep track of all the stuff for them, I will email you the .psd files once payment is received. Thank you all sooooo much for helping someone out that you do not know personally. Here is a view of the templates I have. One is a front and back Christmas card, a birth announcement that can be boy or girl, blog template that the color can be changed on and a save the date that can also be changed. 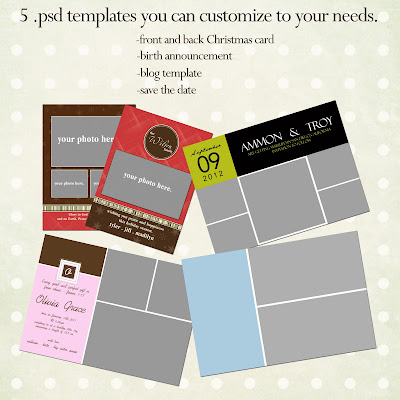